The fruitbody is disk-like to cup-like and sits directly on soil. It is orange, smooth overall and in general the published records of this species say that the fruitbody may be up to 5 millimetres in diameter. Jahn (see the references) is the one exception, for the specimens he collected had diameters of 5-12 millimetres.

The original description of this species was published in the Rifai monograph listed below, based on material collected at Mt. Lofty, Adelaide in 1920. Jahn's was the first record of the species from Europe and the first outside Australia. Since then it has been reported from at least India and Turkey, but there have been very few published records of this species.

Rifai said that the small size of the fruitbody made it easy to not think of this as a species of Aleuria and added that the 1920 material had been found in the Kew herbarium filed under the genus Humaria but with no further identification to species.

There are several genera in which the fruitbodies are small, orange and disk-like to cup-like. However, under the microscope the colourless ellipsoid spores, with a raised mesh-like ornamentation and terminal appendages immediately point to Aleuria. 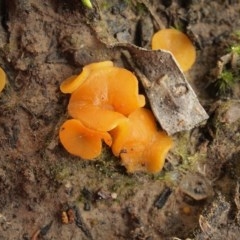 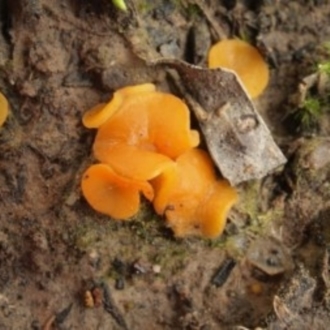 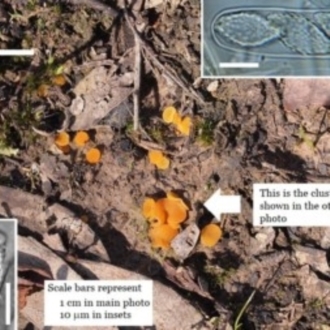