Home Fungi Disk-like to cup-like Cups or disks - with no 'eggs' Aleurina sp.

The fruitbody may be disk-like (and then with a raised rim) or resemble a shallow cup. There is no stem and the rubbery fruitbodies are up to 2 centimetres (or a little more) in diameter, in shades of brown. The upper surface is smooth and the lower surface has tiny pustules or warts (at least near the margin).

Fruitbodies are mostly found on soil (though Aleurina argentina and Aleurina ferruginea have been found on decayed wood).

Four species of Aleurina have been found in Australia: Aleurina argentina, Aleurina asperula, Aleurina ferruginea (all of which occur in the ACT) and Aleurina calospora. Aleurina species are best identified by microscopic features (see the references) but a more yellowish to olive-greenish fruitbody suggests Aleurina ferruginea, while a very dark fruitbody suggests Aleurina argentina or Aleurina calospora (and the one herbarium specimen of the former, collected in the botanic gardens in 2005, includes this comment about the upper surface "olive-brown to blackish-brown or almost black"). However, each of those species may be found in a range of brown shades, so an Aleurina in between the yellow/olive and 'almost black' extremes gives you no quick suggestion of which species.

Various species of Peziza produce brown, cup-like fruitbodies on soil and in a few species you find warty lower surfaces. Pezizas are often more deeply cup-like and some have whitish lower surfaces.

Species of Plectania, Pseudoplectania and Urnula are blackish, may have warty outer surfaces but are usually deeply cup-like, are mostly found on wood and the cup often tapers downwards to yield a well-developed pseudo-stem. 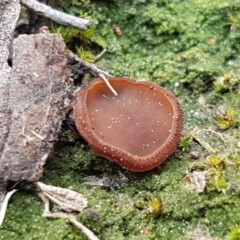 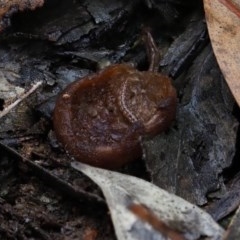 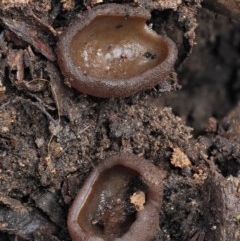 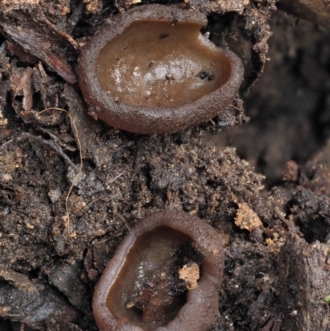 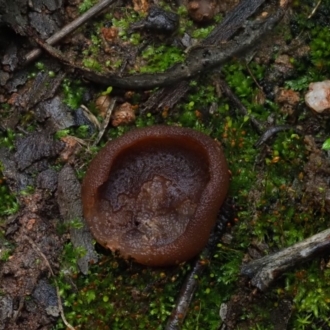 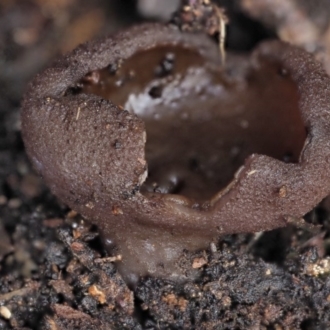